Congratulations are in order. You are now the caregiver for an orchid! Whether you purchased the plant or received it as a gift, you are sure to enjoy your orchid for years to come.

Let’s take a look at what it means to care for an orchid so that it thrives. An orchid does best when it is kept in conditions that are close to its natural origin. This ornamental flower is native to southeastern Asia and Australia, where the weather is mild and humid all year. 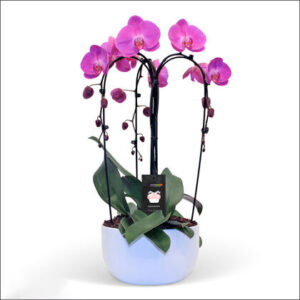 The botanical name of the orchid that you are now caring for is Phalaenopsis (pronounced “fal-a-nop-sees”). It comes from the Greek word phalaina, which means “a kind of moth.” This plant has the nickname “moth orchid.”

However, you refer to them, all Phalaenopsis have similar physical traits. You will see long, coarse roots, leafy stems, and flat flowers that bloom at the ends of stem branches. The leaves are typically large and leathery-looking. The flowers come in a broad range of colours, like white, yellow, pink, fuchsia, and purple, and some are spotted or striped.

Caring for Your Orchid

The three most important concerns for all plants are light, water, and temperature. For Phalaenopsis orchids, the conditions are quite specific:

In cooler climates, the orchid can travel a short distance from the store to your home without being hurt. Encasing the plant in a sleeve or box can be of additional assistance.

Phalaenopsis orchids thrive best in an environment that has a consistent room temperature. Orchids do not fare well in areas that are prone to drafts, such as hallways, during the winter, or in areas that are close to air conditioning units. A temperature between 15 and 25 degrees Celsius is preferred. 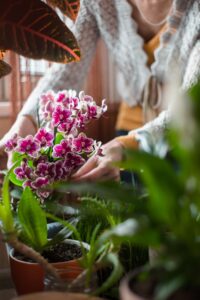 Orchids can generally survive in conditions of moderate to severe drought if necessary. They do not like to sit in standing water, and after they have been watered, they require some time to dry before they are watered once more. To make sure the growing medium (the bark) has enough water, you must first submerge it in water for five to fifteen minutes and then pour off any water that is still standing.

After you’ve provided the plant with water, observe the shade of its roots within the plastic grower’s pot. When the roots of the orchid turn a white or grey colour, similar to the roots that are hanging out of the pot, the orchid is ready for another round of watering. This should take place once per week or every two weeks, at a minimum.

When planting orchids in a planter that also contains other plants, it is important not to upset the arrangement, but to slowly spread approximately 1/4 cup of water around each orchid once a week.

Bringing Air to the Roots

The roots of orchids despise being submerged in water because they prefer to take up oxygen from the air. Make sure that your decorative cover pot is never left with water in it. It is in the best interest of the plant to have excess water removed once it has been watered; this will ensure that the roots do not become suffocated.

If you give your orchid fertilizer, it will become healthier, and when it reblooms, it will produce a stem with a greater number of flowers on it. It is not necessary to do so in order to keep your orchid alive, and there is no guarantee that doing so would “rescue” your orchid in the event that it becomes ill or suffers excessive damage.

When all of the flowers on your orchid have fallen off, you can trim the stem back to the point where it had its last “node” (looks like a small elbow). Because of this, the orchid will be able to shift its attention back to developing new leaves and roots. Your orchid is still very much alive at this moment, and it is making the necessary preparations to produce a new stem within the next three to six months.

Even though it is conceivable for your orchid to rebloom, we are unable to make any promises in that regard. The most likely conditions for reblooming are a combination of an extremely favourable environment and a “shock” to the orchid in the form of a change in temperature. If and when your orchid does decide to rebloom, it will do so either by sending out new shoots from the base of one of the leaves or by branching out from the old stem that was cut back. When the stem has reached the desired length, you have the option of either staking it to a support so that it continues to grow vertically or letting it grow unrestrained. 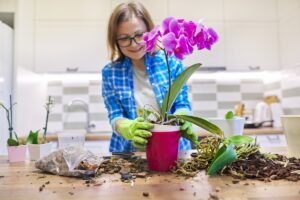 The Life Expectancy of Your Orchid

Your orchid has a good chance of surviving for many years. It is not necessarily the case that your orchid is going to pass away just because it has lost its flowers. You can anticipate that your orchid will continue to produce flowers for somewhere between two and four months.

If the blooms on your orchid fall off prematurely and in a very short amount of time, there is probably something wrong with the plant. It is likely due to the natural aging process of the plant if each of your blooms falls off one at a time over the course of several weeks. If you have some patience, you can try to keep your orchid alive in the hopes that it will bloom again in the future. There are many people who are passionate about orchids and have been successful in maintaining their orchids for a number of years.

416-Flowers.com is your number one flower shop in the Greater Toronto Area. With our beautiful flower arrangements and aggressive prices, we strive to provide the best service to our clients. We also hope that you will find our blog useful with its many educational, instructional and flower focused content.